Faegheh Atashin (Persian: فائقه آتشین‎‎, Azerbaijani: Faiqə Atəşin, born May 5, 1950 in Lahijan, Iran), also known by her stage name Googoosh (Persian: گوگوش‎‎), is an Iranian singer and actress of Azeri origin. She is known for her contributions to Persian pop music, but also starred in a variety of movies from the 1950s to the 1970s. She achieved the pinnacle of her fame and success towards the end of the 1970s. Her overall impact and contributions to Persian pop earned her the title of the most iconic female pop-singer from those regions. She has recorded songs in Persian, Tajiki, Azerbaijani, Turkish, Arabic, English, French,Italian and Spanish.

Following the Iranian Revolution in 1979, she is famously known for remaining in Tehran until 2000 and not performing again due to the ban on female singers. Still, her following grew. Younger people have rediscovered her music via bootleg recordings. Outside of Iran and Azerbaijan, she has a significant following in many other Middle Eastern as well as Central Asian countries, and has even caught the attention of African media and press.Her most recent projects include a new collaboration with singer/songwriter Hassan Shamaizadeh for the track Hayahoo from her last album Ejaz, as well as serving as head judge and head of academy for the popular reality show Googoosh Music Academy which is broadcast on London based satellite channel Manoto 1.

Childhood and career before the Revolution (1953-1979)According to her website, Googoosh was born Faegheh Atashin on 5 May 1950 in Sarcheshmeh Street of Tehran to parents Nasrin and Saber Atashin, who were originally Azerbaijani immigrants from the Azerbaijan Soviet Socialist Republic. She began doing impersonations of some of the singers of the time while being taken on the road with her father. When her father discovered this talent, he put her on stage at the age of three and she was from then on a professional paid performer.

During the 1970s, Googoosh began a meteoric rise to fame and success as she drove the edge of Iranian pop music further and further. Known for her flamboyant outfits and fashion sense, Googoosh wowed her pop culture hungry fans in Iran and abroad with her trademark hairdos and hip-elegant style. Iranian women changed hairdos with Googoosh and she was always one step ahead of them with a new look. Her music ranged from upbeat 1960s and 70s pop, given an Arabic-tinged edge, to declamatory, emotional ballads dealing with love and loss, which at times edge towards chanson and Édith Piaf territory. She starred in over 25 movies, one of which was to be the most commercially successful Iranian motion picture of all time. Googoosh performed many times for the Royal Family and was a favorite of Shah Mohammad Reza Pahlavi’s wife and children. She performed at the party given for the 1977 birthday of Reza Pahlavi, Crown Prince of Iran.

At the time of the Iranian Revolution in 1979, Googoosh was in Los Angeles; however, feeling homesick, she decided to return to Iran. After the revolution, Googoosh, like other artists, was forbidden from performing and her material was banned. She would not perform again untilMohammad Khatami’s presidency, during which she was allowed to tour outside of the country. In the time she was unable to perform, she kept herself occupied at home by taking care of her house and reading. Whereas she had no intentions of leaving Iran, she adapted to her new life.

Googoosh sang in public, away from her homeland, for the first time after 21 years of silence. The Googoosh Comeback Tour was a series of concerts started in July 2000. Having previously left Iran, where females are forbidden to perform, amidst spectacular media attention, she began with a sold out concert at the Air Canada Centre in Toronto on July 29, 2000 and eventually brought the tour to a conclusion in Dubai on March 21 and March 24, 2001 on the occasion of the Iranian New Year,Norouz. Her concert in Dubai was considered a homecoming for her and thousands of Iranians crossed the Persian Gulf to hear her. The two Dubai concerts held special importance: it was the tour finale, and Googoosh was rumored to be planning to return to Iran. Therefore many people believed it might be their last chance to see her. She later claimed that she felt like singing at home. As seen below, the concerts were aimed at cities with large concentrations of Iranian immigrants.

In 2000, a feature-length documentary called Googoosh: Iran’s Daughter was released which chronicled the singer’s life and her icon-status while detailing the socio-political turmoil that led to the 1979 Revolution in Iran. Made by Iranian-American filmmaker Farhad Zamani, the documentary began production in 1998 and was made at a time when Googoosh was still forbidden to give interviews.[citation needed]

In January 2009 she ended her work and career with Mehrdad Asemani, citing “creative differences” and in March 2009 began a new work relationship with her current management team. On 21 and 24 March of that year, during the Nowruz holiday, Googoosh performed in Dubai.

Googoosh and other speakers participated in a 22 July 2009 protest at the United Nations which attracted exiles from Iran. There they stood in front of a banner with names of Iranian protestors that they believed were still incarcerated and the names of other protestors, written in red, who had been killed. During this protest, Googosh made a speech stating that she entered politics because of the outcome of the Iranian presidential election, 2009. She said, “I have come here to be the voice for the sad mothers who lost their loved ones in peaceful demonstrations. I have come here to be the just voice of the grass-roots and spontaneous movement among my compatriots and to show my solidarity.”

In 2011, she served as head-of-academy and head-judge alongside Hooman Khalatbari and Babak Saidi for the widely popular reality game show/singing competition Googoosh Music Academy which is broadcast on the London-based Iranian satellite channel Manoto 1 and is their most watched program. Googoosh Music Academy lasted three seasons. In December 2010, Googoosh had a very notable concert in the Kurdish region of Iraq. Tens of thousands of Iranians came from Tehran and beyond.

In March 2011, the popstar released a snippet via YouTube of a new song she was working on titled “Bedrood”. In April 2011, Googoosh debuted her latest project. The singer launched her own cosmetic collection sold online, aptly titled “Googoosh Cosmetics”. In April 2011 she held a legendary concert at the Nokia Theatre in Los Angeles, CA as well as a record breaking performance at the same venue on October 27, 2012, as a part of her worldwide “Ejaz” Tour. Also on March 26, 2013 she performed at London’s famous Royal Albert Hall for the first time, where other notable Persian vocalists such as Elaheh, Ebi and Marzieh have performed memorable concerts in the past.

In 2012 she released her 6th studio album since her comeback, titled Ejaz. The album consisted of 10 tracks, featuring collaborations with famous Iranian singer/songwriter Hassan Shamaizadeh (“Hayahoo“) and two songs wherein she collaborates with her fellow judge Babak Saidi and show host Raha Etemadi from The Googoosh Music Academy (“Nagoo Bedrood” and “Noghteye Payan”). She also collaborated with Alireza Afkari and Roozbeh Bemani on the single “Behesht.” Another single “Bi Manoto” was a musical rendition of a poem by famous Persian poet Molana (Rumi). The poem came to Googoosh’ attention during her years banned from singing at the time of the Iran–Iraq War. She felt inspired by the lyrics and therefore created her own melody and was finally presented with the opportunity to record it as she had always wanted during the production of the album.[16]

In February 2014, she released a video in support of the gay, and lesbian, community in Iran, which faces significant challenges in it struggle for equal rights, including the ongoing threat of the death penalty for being convicted of being lesbian, and gay. This made her the first prominent Iranian with a huge following to speak out against homophobia in Iran, the video has sparked discussion about issue affecting Iran’s LGBT communities.

Googoosh tours sporadically, making occasional concert stops all over the globe. While not touring, she spends time on new work projects or with her family.

She had one brother who, at the age of 24, was struck by heart rheumatism and died. She has three half-brothers on her father’s side and a brother and sister on her mother’s side. 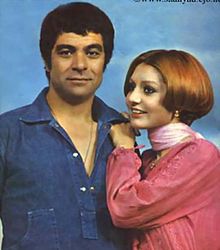 Googoosh’s first husband was Mahmoud Ghorbani. He was a music promoter who had helped Googoosh make a name for herself throughout the ’60s. They married in February 1967. They had a son, Kambiz, who currently lives in Los Angeles and who is also in the music industry. After about six years of marriage, Ghorbani and Googoosh divorced in late 1972.

In 1975, Googoosh married Iranian actor Behrouz Vossoughi. They divorced fourteen months later, in 1976. During their brief marriage they were considered to be the country’s biggest celebrity power couple.

During the late 1970s, Googoosh became involved with Homayoun Mestaghi. She married him in 1979. Several years later in 1985, Googoosh divorced Mestaghi. She then married director Masoud Kimiai in 1991. They divorced in 2005.

In 1980, Googoosh was briefly imprisoned (nearly one month) in the Islamic Republic of Iran.

“Ejaz” (2012) was her sixth studio album since her comeback.

Albums (Since she returned to music)

Poster for “Dar Emtedade Shab”(1977)(در امتداد شب) starring Googoosh and Saeed Kangarani and directed byParviz Sayyad. This would turn out to be the highest grossing film of all time in Iran.

Googoosh also acted in two other movies: Märd-e keraye-i (مرد کرایه ای) and Haci Feyruz (حاجی فیروز), but the production of each of these films was suspended during the final stages for unknown reasons. Googoosh has also acted in many television shows and ground-breaking commercials in Iran.